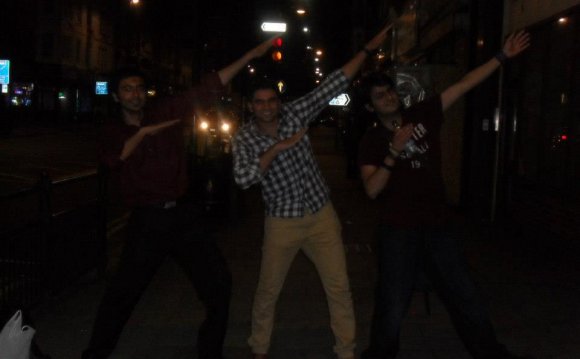 It is important to understand the relationship between theatre, music and dance in South Asia. Unlike the West, where the "musical" is considered to be just one of numerous genre, South Asians have a very difficult time conceiving of any theatrical or film endeavour that does not have music and dance. Films that are produced along the Western vein (sans music and dance) are consigned to the "art-film" category and generally meet with very limited commercial success. The only theatrical genre where song and dance are not expected, appears to be modern TV dramas. (i.e., "soap operas"). The unbroken tradition of linking theatre, music, and dance is traceable all the way back to the Natya Shastra (circa 2nd century BCE.)

Bollywood films must have song and dance, so it is reasonable to look into the styles of these dance forms. It turns out that this does not tell us much, because of the large number of dance styles that have been enfolded into it. Furthermore, Bollywood dancing has changed tremendously over the years.

Films before 1960 tended to draw heavily on classical and folk dance. Since neither "classical dance" nor "folk dance" are homogenous entities, one naturally expects to find considerable variations. Not surprisingly, early films from south India tended to show a lot of influence from Bharat Natyam and Kuchipudi while Hindi/ Urdu films tended to show strong influences of Kathak or the "mujara" dances that were associated with the tawaifs. Although these influences continue today, they seem to have become mixed with many more dance styles and have at time become unrecognisable as to their origins.

Choreography is not a field that gives a lot of fame. It is a demanding job, and one that is largely out of the public eye. But one must never forget that the actors and actresses do not just get in front of the camera and dance spontaneously. Someone has to create the number.

The Indian film industry has been graced with many great talents in the past. Some notables were, B. Sohanlal ("Sahib Bibi aur Ghulam", "Jewel Thief", Chaudhvin ka Chand"), Lachhu Maharaj ("Mahal", "Pakeezah", "Moghul-e-Azam"), Chiman Seth ("Mother India"), Krishna Kumar ("Awaara", "Madosh", "Andaaz") and a host of others.

Clothing and costume are an extremely important element of the Bollywood dance. To a very great extent it will determine the "feel" that the dance will have in the film. With the right costume, one can do many things. If the film is a period piece, the proper costume goes a long way toward giving the feel of that period. If one is trying to make the dance scene dream-like or surrealistic, then obviously one goes for costumes that in no way relate to the clothing found in real life. If you are trying to give an erotic sizzle to an item number you can. well you can figure that one out for yourself. Costumes can also be used to reflect the latest fashions, thus reinforcing the topicality of a dance number.

Proper costumes contribute to the overall "feel" of the dance

Over the decades many great artists have excelled in the field of costume design. In recent times Manish Malhotra (e.g., "Kabhi Alvida Na Kehna", "Veer Zaara", "Kal Ho Na Ho"), Neeta Lula (e.g. "Devdas", "Mission Kashmir"), or Bhanu Athaiya. ("Swades", "Lagaan", "1942: A Love Story", "Gandhi") have made great names for themselves. But these artists are only part of a long tradition which extends back for about a century.

The romantic number has been the cornerstone of the Hindi film since the first talkies. But dance has generally not been a strong part of these numbers. Historically, the hero and heroine simply wandering around at night in a garden. If the camera made strategic moves off-screen to shots of birds and trees, this was quite enough to suggest activities that the censors might not approve of.

Scene from "Pyar Ke Side Effects"

Closely related to the romantic number is the playful number. It is sometimes hard to separate the romantic from the playful because in both cases, the hero and heroine are expressing their undying love for each other; however the playful numbers rely much more heavily upon dancing. In the early days, there was an awful lot of dancing around trees. (I really do not know what Freud has to say about trees). However today, such playful numbers tend to revolve around exotic foreign locales and inexplicable changes in clothing.

The dance styles of these playful numbers has varied considerably over the years. Originally they may have revolved around classical or folk dance, but today, Bollywood has developed its own corpus of material. In the early days, some of these moves were really rather hard to class as dancing. The spastic deliveries of songs by Shammi Kapoor came to mind. Still, from these random spastic jerks and jumping around, identifiable moves began to develop. Today the playful love song has matured into an identifiable set of moves, some of which may be shared by other dance traditions around the world, but others are unique to Bollywood.

The rape scene has fallen out of fashion, but from the late 1950s through the 1970's it was an essential element for any massala film. In this approach, an ingenue or some other secondary female character, was raped. This fulfilled two requirements: it provided the necessary sexual titillation in order to assure distribution, and at the same time it was a convenient dramatic device to establish the villain's character. Although this topic is certain worth further discussion, it is beyond the scope of a page on Bollywood dancing.

A History of Bollywood