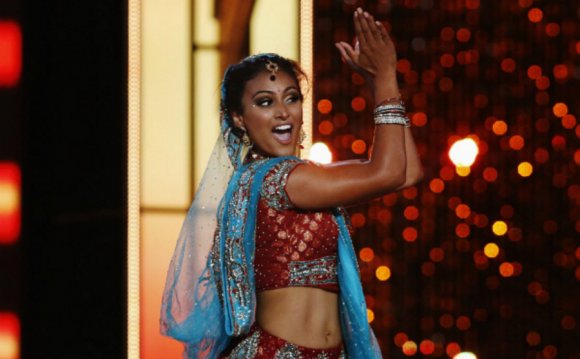 But Davaluri’s win also highlights the growing visibility and cultural influence of immigrants from South Asia – the blanket term the US Census uses to refer to one of the most populous and culturally diverse areas in the world. Today more than 3.4 million people with family ties to this region reside in the US, including those from India, Pakistan, and Bangladesh, as well as Sri Lanka and Nepal. Of these, 80 percent are of Indian heritage, and nearly 3 of 4 were born outside the US.

“For years now, there have been special pageants for second-generation Indian-Americans because they never thought they'd find mainstream success in things like Miss America, ” says S. Mitra Kalita, ideas editor at Quartz and author of “Suburban Sahibs: Three immigrant families and their passage from India to America.” “So Nina Davuluri's win is significant and a sign of mainstream acceptance in America."

“And it’s noteworthy that she danced to a Bollywood song, ” Ms. Kalita continues, “because it's an assertion of identity from another place. And yet that's what makes her even more American.”

Indeed, Davuluri, who titled her pageant platform as "celebrating diversity through cultural competency, " recognized this significance, saying at her press conference, "I'm so happy this organization has embraced diversity. I'm thankful there are children watching at home who can finally relate to a new Miss America.”

Since the 2000 Census, there has been a dramatic increase in the number of South Asians residing in the US. The population of those from India jumped nearly 70 percent, from 1.7 million in 2000 to nearly 2.85 million in 2010. Immigrants from Pakistan, too, have more than doubled in number, from more than 150, 000 a decade ago to nearly 364, 000 today, according an analysis of US Census data by the Asian American Federation in Manhattan.

At the same time, the ranks of eligible voters within South Asian communities, though still relatively small, has skyrocketed since 2000. The number of Indians eligible to vote has doubled to 1.2 million, while the number of Pakistanis and Bengalis, most of whom are Muslim, has more than tripled to nearly 210, 000 residents who can now vote in US elections.

“We have definitely seen that South Asians are very interested in being a part of the civic and political life of this country, ” says Deepa Iyer, executive director of South Asian Americans Leading Together, a national political advocacy group for South Asians in Takoma Park, Md.

“There are more first-time South Asian voters than we’ve seen in the past, ” continues Ms. Iyer, whose organization focuses on immigration and civil rights issues. “More people are becoming naturalized, and one of the first things they want to do is vote."

"So there is definitely an interest in being part of how policies are being shaped in this country, there’s an interest in wanting to enter government service and public service, and we’re seeing more South Asians enter fields of government, running for office, wanting to really give back to their communities in that way, " she adds.

Indeed, Piyush “Bobby” Jindal, the Republican governor of Louisiana, is often mentioned as a 2016 presidential aspirant. And Nimrata “Nikki” Haley, currently the nation’s youngest sitting governor, is also the first woman to serve as governor of South Carolina.