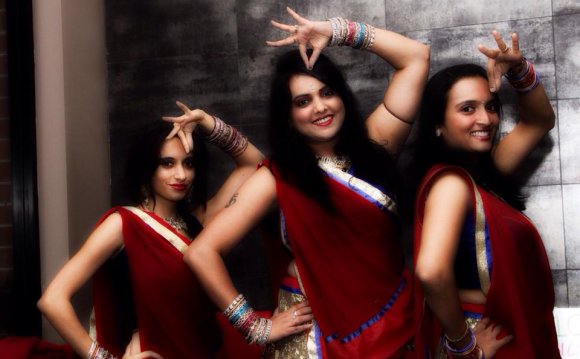 “For us, there’s God, then film stars, then cricketers.”

Most sources disagree on the exact definition of the term Bollywood, so for the purpose of this history, we will define it as follows: Bollywood means films produced by the Mumbai¹ film industry, primarily in the Hindi language, distributed across the normal commercial film circuits of northern India, and containing song and dance item numbers as an integral part of the plot. Bollywood does not encompass all of Indian cinema, contributing only about 20% of the total film output of India, which is the largest in the world and which predates Bollywood (Ganti 3). It is not one genre of film but is a film industry in which there are many genres.

The history of Bollywood stretches as far back as film industries of the rest of the world—the first feature film was produced in 1913, and the first talkie in 1931. The history is varied and complex, with scholarship on the topic gaining more in-depth attention in recent years—ironically, when Bollywood as it has existed seems to have evolved into a caricature of itself. There are four main aspects that help the uninitiated Bollywood viewer approach with more understanding: nationalism, censorship, music, and the three eras of Bollywood. These topics are interrelated and don’t necessarily need to be treated separately.

The characteristics that came to define Bollywood also gave it a quality of nationalism: of representing India as a whole and not speaking to just one religious group, language, geographical area, or caste (as unrealistic as that may be). One of these characteristics was the choice, early on, to use the Hindi language as the language of Bollywood films. Hundreds of languages are spoken in India, and Hindi was not even one of the common ones in Bombay at the time talking films arose. Hindi was chosen because it was common as a trade language; most people knew some of it or could understand it because it was similar to their own dialect. When Hindi became the national language years later, this only increased the sense of nationalism in film. Another characteristic lending to the feeling of a unified nation of India via Bollywood is the eclecticism of the music used. From the beginning, the music created for the films incorporated styles from various traditions—both North Indian and Carnatic classical, light classical, religious, and folk music—and of course Hollywood; as films became more widely known internationally, even more international music influences were used: from Latin to Chinese to reggae. A third characteristic is the world of the Bollywood film stars. In this world, Muslims marry Hindus, Hindus marry Christians, and people from different societal classes can succeed and collaborate. Finally, although this didn’t necessarily guide the theoretical development of Bollywood, the “father” of Bollywood, Dhudiraj Govind (Dadasahib) Phalke, strongly believed that an indigenous Indian film industry was a key to India’s future freedom and autonomy from the British.

Similarly grounded, but different in purpose, to Phalke’s attitude—and extremely impactful to the Bollywood industry—was the government censorship of film. When the British were still in control, during the Studio Era, certain themes about Indian freedom could of course not be included. But it is after India’s independence from Britain that the censorship really strong-armed the industry and subsequently the style. Sex was roundly forbidden, including any “blatant physical contact” suggesting it, such as kissing (Skillman 138). Thus, exaggerated body language replaced these things and became the norm, such as bumping shoulders between two romantic leads or keeping faces very close without touching. The dialogue also reflected the compensation for the missing sexuality. Most importantly, though, the songs took over the expression of love. Three main aesthetics of Bollywood, then—what looks like overacting, what sounds like corny dialogues, and what seem like songs and dances out of nowhere—were actually necessary characteristics, and it can be argued that they have become aesthetics of their own. Viewers just need to become accustomed to appreciating them.

Indian censorship also influenced the creation of several genres unique to Bollywood. For many years, Partition—when Pakistan and India were separated—was not allowed to be directly referred to in a film. India’s enemies could not be named by their true names. So certain plots developed, such as an evil landlord cruelly ruling a town or a family suddenly broken up and not reuniting until years later (called “lost and found” genre). Finally, the censorship of films came from the Indian government’s simplistic ideas about the effect of film: they believed that if it was in a movie, the public would buy it and swallow it with no thought. The government thought that the Bollywood style of film was not classy enough to be called Indian, and they valued “art” films without music (and adhering to the ideals of the government) much more highly. In fact, the Censor Board believed that only North Indian classical music was music that was worthy to be played by Indians (Skillman 139). This animosity between the government and the film industry was increased by the government classifying the industry as a vice—like gambling in the U.S.—and taxing it as such. The government only recognized films as an industry in 1998 (Ganti 50).

Music, of course, is what many unfamiliar viewers associate as the defining characteristic of Bollywood films, and it is certainly what has fed the industry through all the years. Music directors (as film composers are called) actually think of the need for songs in films “not as a statement of principle or an assertion of aesthetic norms, but simple and unquestioned behavior, like the law of gravity” (Booth 29). The music is as much a part of the film as costumes. At the time it became possible to have songs in films, Indian classical music was not the popular music of the day. The upper castes were trained to appreciate it—no one else. It was not widely disseminated. In addition, the Indian classical tradition created teachers and performers, not composers. Film music opened up musical worlds to those who wanted more. When it became possible to record the image and sound of the film separately and then splice them back together into a seamless strip, Bollywood film changed forever, and playback became a driving force in film and popular music. Playback can turn off unfamiliar viewers because it seems so obvious that the actors are not singing, and the same singers will sing for different characters. However, in India, it is thought of as double pleasure—watching a favorite actress and hearing a favorite singer. Playback was also in many ways necessary, since the film equipment used in India has never been able to be of high quality. In fact, the noise from the film equipment was so loud that all the dialogue had to be dubbed again as well. It was only in 2001, with Lagaan, that the first synchronous sound movie was produced.

The twists and turns of a Bollywood dance competition

Best Song Dances of Bollywood of All Time