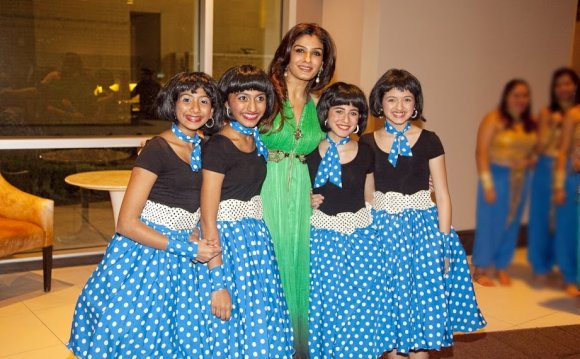 The term Bollywood was created by combining two names, Bombay (the city now called Mumbai) and Hollywood. Bollywood based in Mumbai (Bombay), is India’s – and the world’s - largest film industry in terms of the number of films produced, and also the number of tickets sold each year. In fact, Bollywood has become so internationally ubiquitous that it now has it’s own entry in the Oxford English Dictionary!

The highlight of Bollywood movies are elaborate dance sequences and original soundtracks. Over the years Bollywood movies have developed their own signature style of song and dance, which combines the rich texture of India’s many classical and folk dances, fused with elements of Jazz, Hip – Hop, Arabic and Latin Forms.

The Evolution of Bollywood

The style of dancing in earlier Bollywood films was based on Indian Classical Dance or Folk Dances from various parts of India. These dances included the classical art forms of Kathak and Bharata Natyam.

Then came the era of color films, and by then Indian Cinema was blessed with great dancers like Geetanjali, Sandhya, Helen & Mahipal who with their outstanding energy and performance mesmerized the audiences and took dance to the next level. There was no change in the style of dance, as choreographers still followed the classical and semi classical styles of dance.

Bollywood Dance began to change in the 70s. The Cabaret style of dance became more mainstream & was implemented in many movies. Later on Cabaret was replaced by Disco, which was a worldwide phenomenon at the time.

After experimenting with Classical, Semi Classical, Folk, Cabaret & Disco styles of dance, came an era which introduced Bollywood Free Style of dancing which was well represented by dancers like Govinda who developed their own signature style of dance.

Since the 1980's & the inception of MTV, Bollywood dancing has been heavily influenced by Western dance styles, and incorporates elements from the West. In many cases, the musical numbers are released as separate music videos, and the soundtracks are released prior to the film, in order to further advertise the upcoming feature films. In modern Bollywood films, the musical numbers are often based on the Hip-Hop style of dance as well as other variations of Hip-Hop dance.

Currently Bollywood Dance is still influenced by Western culture, perhaps even more so today than when it began. Elements include the use of frequent costume and location changes during dances, as well as the use of larger dance troupes. And the movements have become more bold & extroverted to capture the audience’s attention. The Evolution of Bollywood Dance is a process that is entirely Indian and yet cross-cultural at the same time.