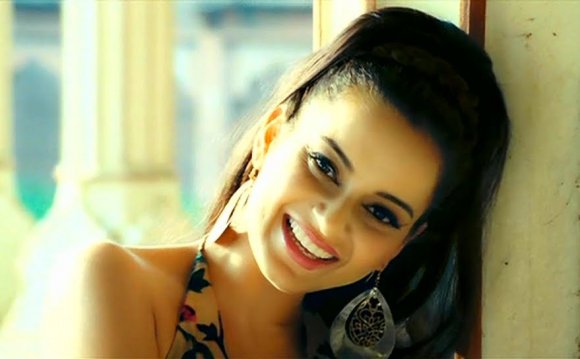 Bollywood has gained popularity all over the world, especially during the past two decades and is quite famous for its extravagant song-dance sequences. Many non-Indians who don’t understand the language too have recorded their versions of foot tapping Hindi songs and have even uploaded them online. Many Bollywood songs are remembered by Indian audiences for the sensuous content in their visuals. These songs didn’t just become chartbusters but have also managed to draw crowds to movie halls, helping in the thumping success of the films. Though Bollywood movies don’t have explicit sex scenes, the makers of these flicks have their own style of conveying sexual messages, which is through songs. The lyrics, the chemistry between the actors and even properties such as rain are great tools which help in making these song sequences seem sensuously steamy. Here are 20 of the hottest and sensuous Bollywood songs of all time which movie buffs from India have remembered for a long time.

1. Aankhon Se Tune Yeh Kya Keh Diya – Ghulam
The movie ‘Ghulam’ was already popular amongst the masses because of its hit number ‘Aati Kya Khandala’ and then this steamy song set the audiences’ pulse racing. The chemistry between the movie’s lead actors Aamir and Rani, in this hit number, filmed in the rain, was highly appreciated by Bollywood buffs.

2. Kaate Nahi Kat te – Mr India
This song, which went on to become an anthem during the glorious 80’s is still considered one of the hottest songs of all time. The chemistry between the sensuous Sridevi and Anil Kapoor, who essayed the role of Mr. India in a film, set the cash registers ringing at the box office.

3. Yeh Samaa Samaa Hai Yeh Pyaar Ka – Jab Jab Phool Khile
Though not as sleazy and bold as the sensuous songs of today, this song from the 1965 flick ‘Jab Jab Phool Khile’ was quite sensuous during its time and expressed the sexual longing between a man and a woman in a subtle manner. The song continues to be popular amongst the masses even today, decades after it first reached music lovers.

4. Tip Tip Barsa Paani -Mohra
Considered one of the hottest songs of the unforgettable 90’s, this steamy rain dance number featuring the ravishing Raveena Tandon and Akshay Kumar was really high on the oomph factor. The song went on to prove that actresses need not be draped in skimpy clothes to make hearts pound faster and even Saris can be sensuous.

5. Kitni Bechain Hoke -Kasoor
The hot Lisa Ray took the big bad world of Bollywood by storm through her sensational debut ‘Kasoor’. Her chemistry with co-actor Aftab Shivdasani, especially in this song had become the talk of the town at the time of its release. The song was played quite often on radio stations across the country too.

6. Jo Haal Dil Ka – Sarfarosh
Aamir Khan proves yet again that he’s the master of sensuous moments through this song from the super hit ‘Sarfarosh’. The actor’s sizzling moves with the long-legged bombshell Sonali Bendre became a hot favorite amongst movie lovers for both its lyrics and the way it was filmed.

8. Zara Zara -RHTDM
Remember the melodious Zara Zara from the movie ‘Rehna Hai Tere Dil Mein’, which became a rage across the country? The song was praised both for its romantic verses as well as its visuals, which was filled with many sensuous elements.

9. Roshni Se Bhare Bhare –Asoka
The intensity of the love between the emperor Asoka and his lover Kaurwaki is best described in this song from the Bollywood epic ‘Asoka’. Apart from the chemistry between Shahrukh and Kareena, the sets, costumes and props such as the use of peacock feathers as a tool of seduction adds to the oomph.

10. Aa Gale Lag Jaa –De Dana Dan
The song seemed more like a reprise of ‘Tip Tip Barsa Paani’ from Akshay Kumar’s yesteryear flick ‘Mohra’, where Katrina was seen draped in a Yellow sari that revealed her toned body. Although the movie ‘De Dana Dan’ failed to mesmerize the audiences, the song became a chartbuster and propelled Akshay and Katrina as one of the hottest lead pairs of Bollywood.

11. Bheege Hont Tere
Serial kisser Emraan Hashmi and the dusky bombshell Mallika Sherawat set temperatures soaring with their steamy number ‘Bheege Hont Tere’ from the 2004 thriller ‘Murder’. The song was yet another reason why the movie was a tremendous success at the box office.

12. Jal Jal Ke Dhuaan – Ek Khiladi Ek Haseena
The hot Fardeen Khan and the sultry Koena Mitra getting cozy in this song from the box office dud ‘Ek Khiladi Ek Haseena’ is popular even today, a decade after the movie’s release. The love making sequences of the film, especially a few shots from this song made this flick one of the boldest ones to be made during the 2000’s.

13. Makhmali -Road
Although the sexy Antara Mali has bid adieu to Bollywood since more than a decade now, the actress will remain in the hearts of Bollywood fans for her sensuousness. Draped only in a bedspread, the bombshell seduces the charming Vivek, who plays her boyfriend in this flick.

14. Ang Laga De – Ram Leela
Sanjay Leela Bhansali is a filmmaker who definitely knows to reveal the sexual tension between his lead pair in the most aesthetic way. This song, featuring the chiseled Ranveer Singh and the leggy lass Deepika Padukone became a sensation across the country.

16. Bheegi Bheegi Raaton Mein –Ajnabee
Rajesh Khanna, who was touted as the ‘king of Romance’ during the 1970’s, will be remembered for this sensuous song from the decade. Yet again, rain played an important role in boosting the oomph factor and of course, the wonderful lyrics.

17. Roop Tera Mastana -Aradhana
Long before the remixed pop version became a hit amongst the youth, this original from the yesteryear classic ‘Aradhana’ became a rage across the public at the time of its release. The body language of the actors, the romantic set as well as the mesmerizing music spiced up the romance between the actors.

18. Hai Rama Yeh Kya Hua -Rangeela
The movie established Urmila Matondkar as the sex bomb of the 90’s and the chemistry between her and co-star Jackie Shroff had become the talk of the town. The song is still remembered as one of the most sensuous offerings of Bollywood.