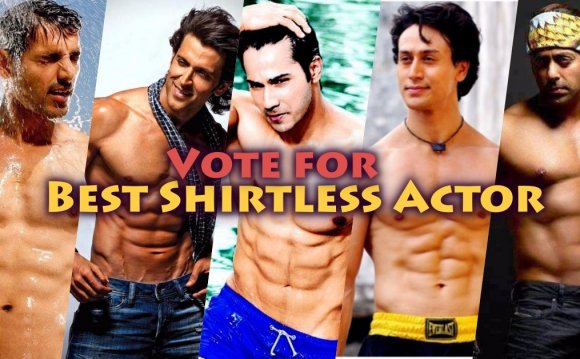 Hey ladies. Guy here. Who says Bollywood doesn’t have hot men? Well, we think it does plenty. With abs. And they’re shirtless. And it’s a war. Full-on. With six-pack abs. So I’ve done the honors of selecting the 15 sexiest and hottest Bollywood actors for you girls to drool over. And for you guys to be jealous of. Let’s find out who’s hot and who’s not.

He has an ok-ish body. In fact, my cousin has a better body than him. And he spends a lot of time in the gym, so he’d hate to be compared with Emraan Hashmi. Just stick to the smooches, Emraan.

Upping his ante and working out those arms with that mustache – way to go, Devgan.

This stuff is good for starters, but you need to work out your abs even more if you want it higher up in the top ten, Varun.

Salman, we’ve always been a fan of your abs. And shoulders.

With those Aarms, Aamir has taken a spot above Salman and we’re so proud! Although Aamir, you may have chiseled your body for this angry role in Ghajini, but we’ll always love you as the annoying yet hilarious Amar from Andaz Apna Apna, who wouldn’t have lifted a weight to save his life.

Well, technically, this picture shows only four abs, but trust me, if you Google more, you’ll find Sonu’s six-pack. (Although, you may also come across a picture with a mysteriously missing belly button. But ignore it).

Director to actor to singer to athletic-body-owner – there’s hardly anything this guy can’t do. But this war is only limited to the hottest bodies and no extra talents are counted in Guy’s ruthless court. Anyway these well-built abs have a well-deserved spot here!

Great going, Ranveer. Hats off to you for working it out until it looks photoshopped!

A lot of hard work (and no nachos, pizzas and other tasty foods) seem to have gone into this body. And let me count those abs again. Wait, how many are there?

That body in that shower by that Miami Beach-beach – you are really making us guys jealous, John.

Well, Shilpa is a big fan so she wanted to say a few words. But she became speechless after seeing your shirtless body. Man, oh man, those abs.

And the Sexiest Bollywood Actor non-award goes to… (drum-rolls, please)…

Neither too much, nor too little. Hrithik, you are nailing the six-pack look. And the shirtless look.

So, guys, those are the top 15 sexiest male men of Bollywood. Which one is your favorite and why, comment below.