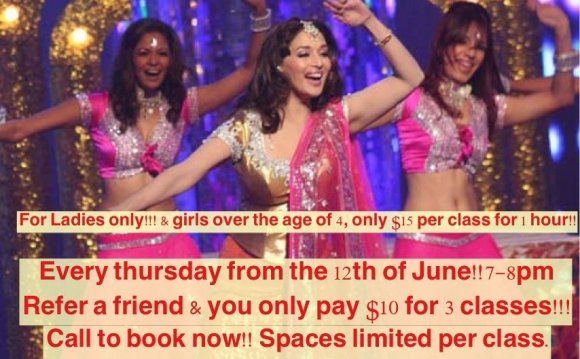 A graceful dancer stands poised in a room full of teenage girls and young women arrayed in front of a wall of mirrors. Her given name is Navodita Sharma but she goes by her stage name Chandni, and she is wearing an elegant, floor-length butter-yellow gown embroidered with white patterns across the front and wrist-length sleeves of see-through lace. Her long, silky jet-black hair cascades down her back.

“Get that elbow up high, ” Chandni calls in a voice tinged with a British accent, while she and the students stare into the mirrors. She lifts her right leg, bent at the knee, the thigh parallel to the ground.

“If you can get that knee up here – five, six, seven, eight – you finish here, ” she says, moving the lifted leg from center to right two times to the count while standing balanced on the other leg.

The teen girls around her are dressed in lehenga cholis – a traditional formal outfit from India – with white satin skirts bordered at the hem with red velvet, belly-baring tops of red velvet with gold embroidery, and flowing shawls, or dupattas, languidly draped over shoulders or around necks. Two older dancers in their 20s wear lehenga cholis in colors of red and purple.

When the music starts, the dancers begin in a thigh-burning open squat position, backs straight, arms gracefully arching from right to center to left then overhead with the beat of the song. Then they are up on their toes, arms swiveling and hips rotating first in small circles, then big, then – slam! – they are bouncing with one foot forward, then back, then forward, their arms, hands and fingers moving in ballet-like precision – their necks, even, turning artfully, their long hair billowing behind them.

“That’s it!” Chandni calls with encouragement.

Chandni, who grew up in Delhi, India, studied many forms of dance, including modern and classical Indian dance, starting at the age of 5. When she was offered a part in a Bollywood movie at the age of 17, her love of blended dance styles blossomed, and she went on to appear in six films in the dance-rich Indian movie industry.

After moving with her British husband to in 1994, she started three years later. Now she feels her classes – a mix of Indian, jazz, hip-hop, Latin and modern dance – appeal not only to her own eclectic style and strengths, but also help keep the lessons relevant to her students, almost all of whom are of Indian heritage but born or raised in the United States. The dances are equal parts rhythmic, elegant, enchanting and athletic.

“I will go home drenched in sweat, ” says Nirali Chokshi, 29, during a break. Choksi, a certified professional accountant, called this practice light compared to others that are more fast-paced and involve cartwheels, handstands and splits. She started with Chandni at the age of 15 after more than a decade of other dance forms – including tap, ballet and jazz – as well as cheerleading.

Born in India, Chokshi wanted to try Bollywood-style Indian fusion dancing. After one time with Chandni’s creative choreographed practices, she was hooked, coming back week after week right through the years she spent studying at the University of Central Florida, finding it one of the most fun and demanding classes she’d ever taken.

“It’s everything from the fingertips to the toes, ” says Chokshi, who at one point during practice did a standing back flip. “It’s a total body workout.”

Like some of the other young women and girls, Chokshi first fell in love with the dancing through Bollywood movies.

Long before plans s were in place for the Tampa Bay area to host the – known as the Bollywood Oscars – in late April, Indian dance studios were cropping up around Central Florida.

Chandni’s was one of them. Word of her classes spread rapidly through the Indian-American community, her creative fusion of dance methods plus her warm and embracing personality fueling her popularity. Classes grew from five students to 70 within a matter of months, and then doubled before a performance at ’s in 1999.

Since then, Chandni’s dancers have performed at civic centers, community centers, an halftime show, festivals and schools. For one event, they raised $30, 000 for area hospitals. They’ve been invited to dance for the Chinese New Year and Jewish community events.

“It might be culturally diverse, but at the end of the day, it has to be all community-driven, ” Chandni says.

While some of her students have danced independently at area theme parks, Chandni accepts no money for her studio’s performances. Instead, through the community performances, students can receive community service hour credits for their schools.

Because Chandni is the studio’s sole teacher, she currently keeps the number of students at between 80 and 100, holding classes on the weekends at one of three locations – a local L.A. Fitness gym, and the. Students range from girls of 3 to women in their 40s.

“These girls are beautiful dancers but you should see their mums, ” Chandni says.

For many of the girls, including Chandni’s own teenage daughters, 15-year-old Karishma and 13-year-old Kareena, the classes are about more than dancing. The classes teach them about customs, songs and language and help them feel connected to their Indian heritage.

“My entire family asks me to do performances whenever we get together or there’s a wedding, ” says 14-year-old Mansi Patel, who has been attending classes for a decade.