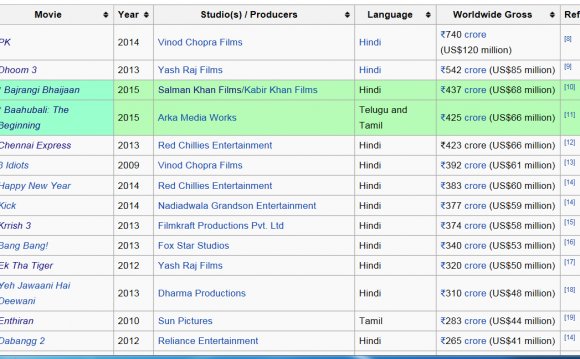 2013 had its share of 100 crore and 200 crore films but when it came to 2014, it outdid the previous year's records with full aplomb and flourish. With more screen counts, more variety and a plethora of big budgeted films hitting the screens this year, 2014 always looked promising and now that the year is set for a closure, it would not be wrong to say that it did live upto its promises.

While there were other films which were surprisingly successful, there was the Bolly heavyweight brigade which brought in the numbers with ease. From Aamir Khan to Shah Rukh Khan, Salman Khan to Ajay Devgn and Hrithik Roshan, all big guns of Bollywood fired setting box office blazing with records.

Here's a look at the 5 biggest box office blockbusters of 2014.

Kick had everything moving for it - a mass favourite superstar, a hot heroine, a slick story line and a successful producer director. Kick had no reasons to go wrong and it did not. Salman's first film that entered the 200 crore club, Kick brought in full houses and ran for over a month at plexes. Salman and Jacqueline's chemistry hit the right chord and a menacing Nawazuddin added the much credibility to the content of the film. And this Salman film was not a no-brainer like his other films!

Ajay Devgn had suffered a Himmatwala last yar and he had to bounce back. With Rohit Shetty having his back, things were never meant to go the Himmatwala way. Plus, Kareena Kapoor's screen presence brought in a lot of cheers and Singham Returns opened to the highest collections back then, beating Salman's Kick. but the film could not keep momentum and fizzled out in the second week itself, not before raking in over Rs 140 crore at the box office.