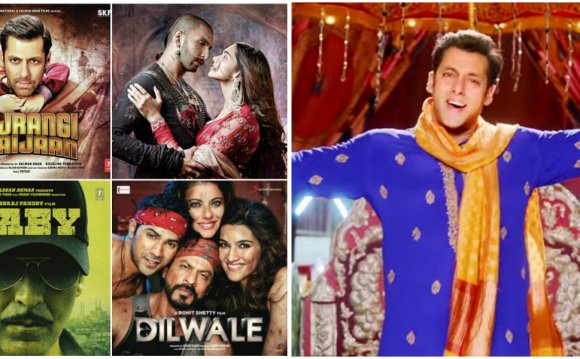 Bollywood had its share of big budget movies that turned out to be flops at the box office. Producers who invested huge sums of money in those projects, found the returns depressing.

Some of the recent movies, in spite of having popular star cast, badly suffered and could not even make up for the production cost.

Here is a list of 15 big budget Bollywood movies, which flopped miserably at the box office:

1) "Bombay Velvet": Directed by Anurag Kashyap, "Bombay Velvet" featured Ranbir Kapoor, Anushka Sharma and Karan Johar in lead roles. The film was expected to do good box office business, considering the star cast and promotions, but it turned out to be one of the biggest flops of all times. The Rs 120 crore movie died away with a box office collection of just Rs 31 crore.

2) "Roy": This is another Ranbir Kapoor-starrer, which also featured Arjun Rampal and Jacqueline Fernandez. Directed by Vikramjit Singh, "Roy" was made with a budget of Rs 40 crore but could collect only around Rs 44 crore.

3) "Aag": Initially titled as "Ram Gopal Varma Ki Aag", it was a remake of the all-time hit "Sholay". Having a huge star cast including Amitabh Bachchan, Ajay Devgn, Mohanlal, Sushmita Sen among others, "Aag" was one of the biggest disasters of all time. The film failed to impress both the critics and the audience, turning out to be one of the biggest flops of Bollywood.

4) "Drona": The fantasy film featuring Abhishek Bachchan as a superhero also had Priyanka Chopra and Kay Kay Menon. Produced at a budget of Rs 60 crore, the film could not even collect half of its production cost.

5) "Kites": Directed by Anurag Basu, it featured Hrithik Roshan and Barbara Mori. Although the film received mixed response from critics, it failed to create any impact at the box office. It had a budget of Rs 60 crore but got a return of Rs 49 crore.

6) "Veer": This is one of Salman Khan's flop movies, featuring Zarine Khan and Mithun Chakraborty. Salman played the role of a warrior but the film lost the box office battle, earning Rs 46 crore, against a budget of Rs 40 crore.

7) "Yuvvraj": Another flop in Salman Khan's kitty was "Yuvvraj". Incurring a cost of Rs 50 crore, the film bombed at the box office with a collection of Rs 16 crore.

8) "Himmatwala": This was one of the biggest flops of Ajay Devgn and director Sajid Khan was highly trolled for making it. Produced at a budget of Rs 70 crore, the film died after doing business worth Rs 47 crore.

9) "Guzaarish": This Hrithik Roshan and Aishwarya Rai Bachchan starrer was made at a cost of Rs 50 crore. But the producers had to settle for Rs 29 crore.

10) "Blue": Starring Akshay Kumar, Sanjay Dutt, Lara Dutta and Zayad Khan, the film was directed by Anthony D'Souza. It had a whopping budget of Rs 100 crore but is one of Bollywood's biggest flops.

11) "Love Story 2050": Harman Baweja and Priyanka Chopra starrer "Love Story 2050" was a science fiction love story. It had a budget of Rs 60 crore and made an earning of almost half of the budget.

12) "Saawariya": This happens to be Ranbir Kapoor's debut movie starring Sonam Kapoor and a special appearance by Salman Khan. Directed by Sanjay Leela Bhansali, "Saawariya" made a box office collection of Rs 36 crore, against a budget of Rs 40 crore.

13) "Chandni Chowk To China": The Akshay Kumar and Deepika Padukone starrer was made at a big budget of Rs 80 crore but failed to impress the audience, collecting only Rs 55 crore.

14) "Ra One": The film presented Shah Rukh Khan as a superhero, Kareena Kapoor as his love interest and Arjun Rampal as the villain. It was created at a huge budget of Rs 130 crore but failed to retain the cost as it earned Rs 114 crore at the box office.

15) "Humshakals": This is another disaster by Sajid Khan. It featured Saif Ali Khan, Riteish Deshmukh, Ram Kapoor, Bipasha Basu, Tamannaah Bhatia and Esha Gupta. The film was made with a budget of Rs 75 crore and gave a return of Rs 63 crore.