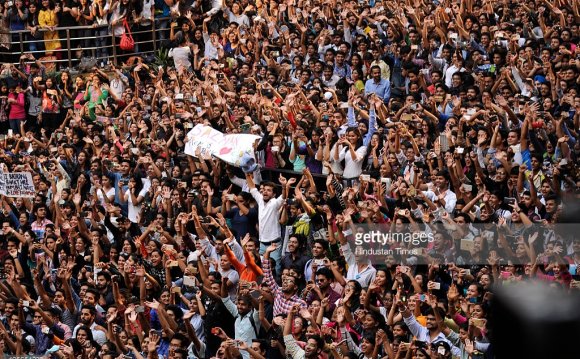 Sanjay Dutt (left) was handed a five-year jail sentence by the Supreme Court for unlawful possession of arms. Salman Khan faces a culpable homicide charge for allegedly running over a man in a drunken state

Salman also faces a culpable homicide case for allegedly running over a man in a drunken state while Saif faced a police case last year when he got involved in a brawl with an NRI businessman in a restaurant. That apart, he recently allegedly got embroiled in a heated exchange with security staff at the Lucknow airport.

Even as IPL 6 began earlier this week, the media was full of reports reminding how Shah Rukh Khan is apparently barred from entering Wankhede Stadium for five years owing to a brawl he was involved in at the venue last year. A police case was registered against him over the scuffle. SRK regularly faces legal troubles as unknown lawyers and social service groups file PIL on various non-issues.

Cashing in on the demi god status that seems to give our Bollywood stars special status, several from the political lot and other walks of life also come out in their support to boost their own public image. Emotional support for Sanjay Dutt from Justice Markandey Katju, Mamata Banerjee and Amar Singh has once again proved that supporting the inaction of Bollywood's bad boys helps augment public image.

"The audience goes by the face value and on-screen image of Bollywood stars. They fail to understand the thin line between real and reel image. Our stars enjoy a mythical aura that helps them enjoy blind admiration of emotionally- challenged fans, " says ad-filmmaker and image consultant Prahlad Kakkar.

"Several of our superstars have succeeded in creating a false Robin Hood image - wanted by the law and loved by the public. This is also media-fed and PR-driven. An ordinary fan fails to differentiate between a star's onscreen image and real-life persona due to which he ends up making such an emotional connect, " adds Kakkar.

NO DENT IN STARDOM

Despite the legal troubles, our superstars rarely face adversity in their career. After serving 18 months in jail a while back, Sanjay Dutt came out to regain superstardom and emerged as the endearing Munna Bhai of Bollywood. Salman is another example of how a bad-boy image, if moulded smartly with the right PR tack, can elevate a star's professional status in this country.

"A star's legal case has nothing to do with the success of his films at the box office. Stardom can be stronger than the impact of the news of an actor's involvement in illegal activity at times. Indian film goers are way swayed by the aura of stars, " says trade analyst Komal Nahta.

This explains the continuing success of Salman Khan who, despite getting embroiled in two legal cases - the black buck poaching and the culpable homicide charges - never saw a decline in his stardom.

His PR machinery has established Salman as a bad boy who is essentially good at heart. This is in sync with the kind of larger-than-life action roles he chooses, delivering back-to-back hits. He also endorses various prominent brands and has signed an exclusive deal worth Rs 500 crore with a prominent channel that gives them the rights to his films over the next five years.

"In Bollywood, a star is as big as his last film. Legal cases rarely interfere with image. Once an actor bounces back with a hit, he can regain his position, " says Nahta. On cue, Vidhu Vinod Chopra plans to wait for Sanjay to finish his jail term, after which he will begin Munna Bhai Chalein Dilli.

Salman managed to rectify his bad boy image primarily hardselling an avatar as Bollywood's biggest philanthropist. Thanks to a well-crafted publicity machinery, Salman's charitable side and his NGO Being Human have been elaborately played up in the media.

"Salman has been a charitable person and the activities by his organisation have earned him a reputation. The rectified image has extended to his reel life and helped him in his career, " says Kakkar.

Sociologist Shiv Vishvanathan feels that the Bollywood audience enjoys being part of the day-to-day drama in a star's life.

"The audience enjoys tracking their favourite actor - his life, his travel, his being taken to court. Since these actors have a larger-than-life image, the audience enjoys being in touch with their real-life trouble without being rational about the issues, " he says.

SRK got unwarranted attention when Mumbai Police registered a case against him for his alleged scuffle with security staff at Wankhede Stadium. The alleged incident took place during IPL last year and, bringing out the brash side of SRK, saw him being banned from the stadium for five years. His critics dubbed the alleged incident as a futile exercise to garner attention at the peak of the tournament.

At times, our stars are also known to play out their bad boy avatars in public just for publicity. Saif faced arrest after a brawl with a South African NRI businessman Iqbal Meer Sharma last year. The star had reportedly broke the nose of the man who had requested the actor and his friends speak softly in a five-star restaurant in Mumbai. The charge of assault coincided with the release of his film Agent Vinod, and was perceived as a gimmick to enhance his action hero image for the spy thriller. A case based on charges of assault was filed against Saif and the battle in court continues.

Bollywood Actors Who Had Image Makeovers For Films | Hot ...