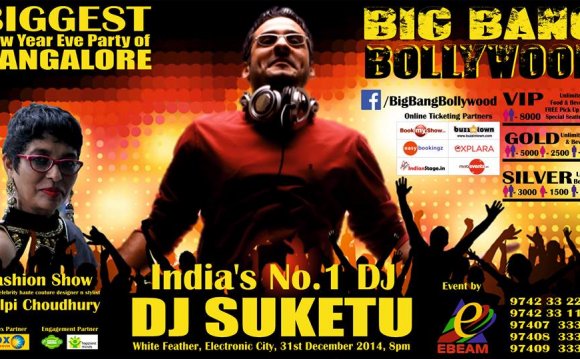 Ranbir Kapoor and Katrina Kaif are already making headlines, thanks to the pre-Christmas party at their new residence that was attended by their close friends from the industry, but the couple apparently has more intimate plans for the New Year. According to a Bombay Times report, Ranbir and Katrina will head to London to bring in 2015. The report also stated that Katrina is already in London to celebrate Christmas with family, Ranbir will soon join her there and the couple may then go ahead to New York to ring in the New Year.

2014 has been a great year for Sunny Leone in terms of her career. Right from 'Baby Doll' to horrex, Ragini MMS 2, to being the most searched celeb online in India, the actress has gone places. According to a Bombay Times report, Sunny has resolved on behalf of our Prime Minister, Narendra Modi. "I want Narendra Modi to make a resolution for all the NRIs this year. The international community has been interacting quite well with him. His 2015 resolution should be to make it easy for NRIs like myself to do business in India, " the report quoted Sunny.

While Sunny Leone looks forward to do more business in 2015 being in Bollywood, we take a look at how other Bollywood celebrities are ringing in the new year...

It is that time of the year when Bollywood and socialites take off for more happening shores. And as always, it is Goa that rules the roost. According to a Mumbai Mirror report, some of the city's party happy people, DJ Aqeel and wife Farah, Bipasha Basu, Rocky S, Rohit Gandhi and Mustafa and Rukshana Eisa are already there and enjoying the sun, sand and beaches. Priyanka Chopra, too, announced that she will spend time with family at her Goa farmhouse, the report further states.

Reportedly, fashion designer Surily Goel and director Karan Johar bid farewells on Instagram as they set off for a 'singles' trip to another perennial Dubai where they will welcome 2015. The Mumbai Mirror report states that Delhi-based industrialist Sunjay Kapur, is bringing in the New Year in Phuket.

A Mumbai Mirror report stated that Deepika Padukone has already flown to Maldives with her family to bring in Christmas. The report further quoted a source saying, "“She has made reservations in a plush hotel in Noonu Atoll, which is one of the most beautiful beaches in Maldives. Deepika has booked an entire villa there." The report further stated that Ranveer Singh, who is busy shooting for Bajirao Mastani, has been given a week off for New Year by taskmaster Sanjay Leela Bhansali. The Mumbai Mirror report quoted a source saying, "They've decided not to shoot from the 27th till the 5th of January. Ranveer will most likely fly to Maldives and then the two are going to head to another destination together for a romantic break. Both of them have had a good year together and they want to ring the next one together too."

It seems like Sidharth Malhotra and Alia Bhatt are the new couple in B-Town. The duo made their debut in Bollywood with the same film - Karan Johar's Student of the Year. According to a report in Bombay Times, Sid and Alia were together all the time at Ranbir Kapoor and Katrina Kaif's pre-Christmas party. The report further stated that Sidharth and Alia may take off together to ring in the New Year, the destination may be Goa or some other party location.

Every year on Christmas eve, Kareena Kapoor Khan visits the midnight mass along with her family - Karisma, Babita and is also accompanied by her BFF Malaika Arora Khan and Amrita Arora Ladak. This year too, she will be attending the mass post which the actress will jet off with her Nawab. A report in Bombay Times states that Kareena and Saif Ali Khan will be spending their New Year in Switzerland, as they do every year.

2014 has been a very successful year for Akshay Kumar. The actor has had decent releases like Holiday and Entertainment. And as the year comes to an end, Akshay has planned for an exotic break with family in South Africa. According to a Bombay Times report Akshay Kumar along with his family - Twinkle, Aarav and Nitara will be flying to Cape Town for a 10 days vacation. Akshay has been busy with his next film Baby and this seems like the perfect family holiday. The report also stated that Akshay Kumar and his son, who are fans of nature, will be going on a safari.

Shah Rukh Khan has had a very successful year at the box-office, with the release of Happy New Year. And to usher in an equally successful 2015, SRK will reportedly spend some quality time with his family. According to a report on Hindustantimes.com, SRK and his family will be in Dubai for the New Year. Shah Rukh Khan owns a plush bungalow in the Palm Jumeirah locality, where a party might have been planned. The report further states that SRK will be flying down to Dubai with his family - Gauri, Suhana and AbRam, while his eldest son Aryan will join them there directly from the UK and only close friends from Bollywood may be present at the bash.