How to be an actor in Bollywood? 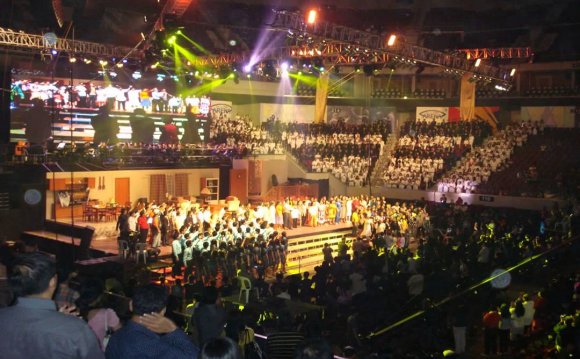 So you haven't been born a Kapoor, Khan or Sippy, but you still want to get into Bollywood?

If you're determined of being in the movie you're watching, don't give up on your cinematic dreams. While there's no guaranteed method for making it big in Bollywood, talent, persistence, connections, and a very thick skin usually pay off.

"Have patience and believe in yourself. If you are talented and true to your work, you will get that big break, " says actor Rajat Barmecha, who made his Bollywood debut with the 2010 sleeper hit Udaan. He joins a panel of outsiders-turned-Bollywood successes who share their advice about getting your name rolling in the credits - whether it's as an actor, director, choreographer, dancer, or in any one of those critical behind-the-scenes jobs.

Ignore the naysayers. When 22-year-old Rajat Barmecha signed on for Udaan, he had only a few modelling assignments under his belt. He had no filmi background, no 'godfather' in the industry, no training, no manager, and his first audition for the role was not a success. While everybody agrees there's no formula to get into Bollywood, you would think it would be hard to do without at least one of the above. But Barmecha did, and is now a successful and critically acclaimed actor.

Others have blazed their own trails as well. Vishal Bhardwaj composed music before he became a Bollywood director with Makdee; Kunal Kohli was a film critic pre-Mujhse Dosti Karoge, and Madhur Bhandarkar worked in a video library... and that's just a small range of the jobs people did before becoming directors.

Learn from auditions and meet the right people: It's easy learning even if you haven't got your big breakthrough as an actor. "There is no shortcut to success, but do as many auditions as you can - they were my biggest learning process, " Barmecha says.

Barmecha also believes that acting or other film schools aren't necessarily the right way to get into the business, but it's much more important to network and make the right connections. Beyond that, his advice is to work hard, stay focused, not get jealous of others' success, and to stay grounded.

Training is good... Film school is obviously not a requirement to becoming a director, but it's the one recommendation director Prakash Jha makes. "Get some formal training, " he says, suggesting institutes such as Film and Television Institute of India or Whistling Woods. The training doesn't have to be in directing. Any film-related field - editing, cinematography, critiquing - that gives you an introduction and some practical instruction will do.

But experience is better: Training on the job is what will actually teach you the nitty-gritty of being a director. To become the man calling the shots, the most valuable learning role is that of an assistant director. It's the job that forms the basis of most of Bollywood's current crop of successful directors - because it gave them hands-on experience in the craft.

Explore the options: Being an actor or director might be the big Bollywood aspiration, but a movie requires any number of crew members - editors, storywriters, lyricists, cinematographers, set designers, costume designers, sound recorder - jobs with a higher rate of success in breaching Bollywood's barriers.
One of the most desirable jobs in Indian movies is, obviously, dance and choreography. To get a break as a dancer, choreographer Ganesh Hegde advises circulating a demo of your work. Put together a demo tape with different sequences that showcase the breadth of your talent. If you want to be a choreographer, first assist a good Bollywood choreographer. "It's the only way to understand camera angles and stage sets, " says Hegde.
Perfect your craft and be open to everything: To get a break as a dancer, Hegde says you should send around a demo tape to bag an audition. Once you are picked to be part of a troupe, you will spend at least three months training learning that choreographer's style. "Being a dancer is simple, " says Hegde. "Stay updated with all the different forms of dancing - right now it's western - be the best at your job, stay disciplined about weight, look, grooming, and you'll come to the front row."
Perfecting your skills is crucial, because you have to be good at what you do. "Bollywood is a lot of hard work, " says set designer Sugandha Leekha, who bagged her first job in set design over a conversation with friends. "It's not glamorous, it's crazy. To be part of it you have to be really passionate about what you do. You can't have set notions about what you will do and what is beneath you - you have to be open to anything and everything."
Source: timesofindia.indiatimes.com

How to Act in Bollywood-PariAndHarvin.com

How to be an actor in Bollywood? Quick answer? How did ...