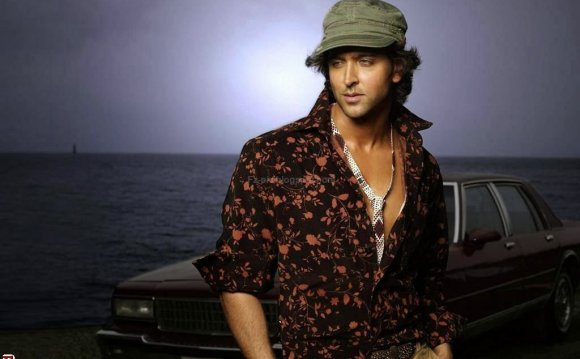 : Married to Suzanne Khan; has two sons Hridhaan and Hrehaan.

He has two thumbs on his right hand.

As a child, Hrithik fought hard to overcome a stammering problem.

He worked for many years on the sets of his father Rakesh Roshan’s films to learn the business from scratch.

Hrithik has been documenting his daily life for many years by taking pictures and putting them in scrapbooks.

With the looks of a Greek God and an enticing combination of star quality, Hrithik Roshan comes across as a complete gentleman. He skyrocketed to fame with his acting debut, Kaho Naa… Pyaar Hai. His twinkling green eyes, winsome smile, and a lean, chiselled body ensure that Hrithik has a huge fan following.

Roshan was born in Mumbai to a Punjabi Hindu family of cinema personalities. His father, actor and director Rakesh Roshan, is the son of music director Roshan; while his mother, Pinky, is the daughter of producer and director J. Om Prakash. Hrithik has an elder sister, Sunaina. His uncle Rajesh Roshan is a famous music director. As a child, Roshan attended the Bombay Scottish School. He later attended Sydenham College, where graduated in Commerce.

He got a taste of Bollywood as a child, when he appeared in the films Aasha (1980), Aapke Deewane (1980) and Bhagwan Dada (1986). But it was in the year 2000 that Hrithik made his debut as the leading man in the film Kaho Naa… Pyaar Hai, opposite the debutante actress, Amisha Patel. The film was one of the biggest box-office successes of that year. Later that year, Roshan starred in Fiza (2000). Although the film did poorly at the box-office, Hrithik’s performance was praised. His last release that year was Mission Kashmir, where he starred with Sanjay Dutt and Preity Zinta.

Yaadein was his first release in 2001, followed by the melodrama, Kabhi Khushi Kabhie Gham, which did extremely well at the box office, becoming the second-highest grossing film of 2001 and the then biggest overseas hit.

Hrithik had an unsuccessful year in 2002 when all three of his releases – Mujhse Dosti Karoge!, Na Tum Jaano Na Hum and Aap Mujhe Achche Lagne Lage – were declared flops.

In 2003, Hrithik made a comeback with the science-fiction film Koi… Mil Gaya, which saw Hrithik play a mentally challenged young man.The film was the highest grosser of the year. Lakshya was Roshan’s only release in 2004; the film did not do well at the box office.However, Hrithik’s performance was praised by critics.

Roshan took a two-year break from acting before resurfacing with the superhero film Krrish, a sequel to his 2003 film Koi… Mil Gaya which released in June 2006. The film was a major box office success. This was followed by the action flick Dhoom 2, the sequel to Dhoom, wherein he played a negative character. His pairing with Aishwarya Rai Bachchan in the film was liked by the audiences. He got back with Aishwarya for another film, Ashutosh Gowariker’s Jodhaa Akbar (2008).

Roshan then appeared in Luck By Chance (2009), in which he made a guest appearance. The following year, he was seen in Anurag Basu’s Kites along with Mexican actress Bárbara Mori and Kangna Ranaut. The film failed to do well at the box-office after taking a huge start and was eventually declared a flop. He next acted in Guzaarish opposite Aishwarya. Upon release, the Hrithik’s portrayal of a quadriplegic patient, Ethan Mascarenhas, received rave reviews.

In 2011 Hrithik Roshan was seen in Zoya Akhtar’s Zindagi Na Milegi Dobara opposite Katrina Kaif. Hrithik played role of Vijay Dinanath Chauhan in Karan Johar’s remake film, Agneepath. The film turned out to be a super-hit and was the first Bollywood success of 2012.

​In 2013, the makers of famous Krrish ​series had come up with its 3rd part.​ ​Krrish 3 ​released on 1st November​. The movie was very much trashed by the critics, however, that did not affect the film’s business as it went on to break some records set by the Khans in the past. Krrish 3 made it to the 200 crore club as well.​

​In 2014, Hrithik Roshan starred opposite Katrina Kaif (again after ZNMD) in Hollywood film ‘Knight And Day’ remake by Siddharth Anand titled Bang Bang. The movie made little above average at the Box Office.

Hrithik Roshan would ​now ​be seen in Ashutosh Gowariker’s next Mohenjo Daro which is set to release in 2015. It is based upon a period adventure and love story that is set during the Indus Valley Civilization.