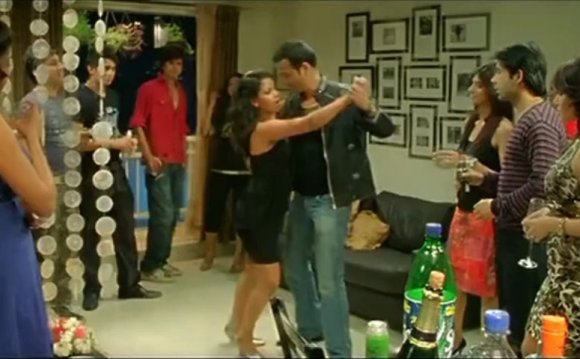 With 2015 coming to an end, it is natural for people to get into introspective mode and reflect on the year gone by. Why should Bollywood be left behind, in that case?

2015 brought with it several quality Bollywood movies, and a few small-budget films too went on to rank among the highest grossers of the year. We have had a large dose of Ranbir Kapoor, Akshay Kumar, and Kangana Ranaut. We have seen some beautiful movies on social issues, while many others spoke of love stories, crime, and self-discovery.

Let us travel down memory lane, and revisit some of the best Bollywood scenes from 2015, shall we? Here are some scenes that made us yearn, cringe, and brought buckets of tears to our eyes!

For me, Tamasha was one of the best movies of 2015. The best scene from this movie was when Deepika realizes how much she loved Ranbir, just before she left Corsica. This scene was heart-warming in itself, and what added to the emotional factor was the kiss she shared with Ranbir and the journey in the car to the airport. It did seem like a well-deserved scene from the movie!

This movie did wonders for both Salman Khan and the bundle of cuteness, Harshali Malhotra aka Munni. There were many scenes which gave the film its share of audience and helped them garner huge share in the box office. However, the last scene where a mute Munni finally ends up calling Salman “Mama”, stole the show. Atleast I did see many who sobbed for this scene in the theatres!

Given that this movie is known for its serious story, the scene where Deepak is about set fire to the corpse who is actually his love Shaalu, was indeed heart-wrenching and emotional. This scene is later followed by his monologue while sitting with his friends on the banks of the river. Vicky Koushal has indeed done justice to his role in the movie along with Richa Chadda.

The movie garnered a lot of rave reviews for its gripping story and Anushka’s acting. It did give us a taste of reality and was quite direct. The scene where we see Anushka holding a cigarette and smoking it, silently watching her assailant die came out quite strong. It showed the true emotions she experienced at that time while being helpless and frustrated.

This movie came out to be the blockbuster of 2015. The climax scene of this movie, where Katappa killed Baahubali, left everyone’s imagination soaring. But the scene where Baahubali stops Bhallala’s statue from falling and helps the workers finally place it back was a treat to the eye. This scene when seen on the silver screen looked larger than life and did give me goosebumps!

Deepika, with her naturalistic acting with the old, stubborn Amitabh Bachchan, steals the show. Irrfan Khan, already known for his impeccable performance as an actor, does it again. With his advices to Mr Bachchan on how to sit on a commode in a hotel to helping Bachchan understand his daughter, he does it all. So when he shows Big B how to sit on a commode, the audience was in splits!

This movie was a multi-starrer. But still, Ranveer-Priyanka, as the siblings under authoritative figures worked very well for the audience. The way they fought, supported each other and loved was just commendable. For me, the scene where Ranveer tries to talk to his parents in the hospital, where his father is undergoing treatment, was very well-scripted. This scene depicted the typical family room discussion we have within our families over a problem!

The five-minute action sequence with Taapsee Pannum, where she fights with Sushant Singh, a terrorist, is easily the most striking scene in this movie. The scene had some very real action, and was special as an actress was doing the action sequence. Worth a watch, indeed!

This movie was supported entirely by Big B’s epic performance. The scene where he loses his voice after the accident shocked everyone. The way he struggles to speak and express himself at Dhanush’s grave was so very well done!

The movie is well-known as a crime-thriller. One scene that really stood out in this crime thriller was when both the investigation parties were seen arguing about their theories around the girl’s murder. Irrfan’s sarcastic giggles - while he knew very well he was losing the case - gave the scene a bittersweet lightness, too.

Adding to the crime-thriller plot of 2015, this movie was indeed gripping. Of course, the best scene of the movie is in the end when Ajay Devgn walks out of the police station and the shots followed by this reveals that the body is buried over there. This movie did not only play on the minds of the characters of the film, but also on us!

The movie had many moments that showed the chemistry the seven girls shared with each other. The last scene where Sandhya Mrudhul and Anushka Manchanda shoot the rapists was too much to take. This scene gives every bit of reality that the society needs and it is well-explained through this scene.

This year’s one of the most anticipated movie was Dilwale. With the favourite Jodi of Bollywood Shah Rukh Khan and Kajol coming together after many years, this movie has received a good response at the box office. There were quite a lot of Kajol-SRK moments seen in the movie and each one had the audience swoon. For me, surprisingly, was not about the chemistry, but the scene where Varun Sharma’s brothers realize he was stealing from their garage and he confronts him. What follows is a monologue where he accuses his girlfriend for making him a thief. This scene was something similar to the famous monologue of Kartik Aryan from Pyar ka Punchnama 2. Though there were flaws in the movie, it does hold a special place in all the SRK and Kajol’s ardent admirers!