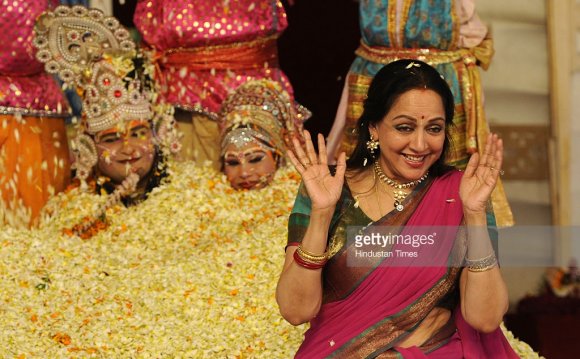 The 5th Tamil speaking actress after Anjali Devi, Vyjayanthimala, Padmini, Waheedha Rehmaan to become a major Hindi film star. Ironically, Hema's career almost ended before it began. She worked as background dancer in 2 Tamil films in 1963. C.V.Shridhar, director threw her out of the Tamil film Veniradai he was directing, saying she was too thin. The role which Hema was given was the role which was subsequently done by Venidradai Nirmala. Then made her debut only in 1968 in Hindi.
Hema Malini began her Hindi film career opposite Raj Kapoor in Sapnon Ka Saudagar (1968) where she became labeled the "Dream Girl" which was a promotion strategy to promote the film however sapnoan ka saudagar was a flop. She had a glorious reign as a leading actress during the 1970-85. She had 18 hits and 15 flops opposite dharmendra. She had 5 hits of 10 films she did with shashi Kapoor fron 1969-87. She had 10 hits opposite Rajesh Kannan of 15 films from 1971-91. She won the Filmfare Best Actress award for Seeta Aur Geeta (1972), but in the early 80's, her only hits were opposite Rajesh Khanna where she had 8 hits opposite rajesh after her marriage and later she decided to concentrate on 'character' roles, often those with feminist undertones.
In the book "Hema Malini: The Authorized Biography, " (2007) she revealed that both actors Jeetendra and Sanjeev Kumar proposed marriage to Hema, but it was Dharmendra, with whom she formed a hugely successful on-screen couple, that won her hand in the end. She defied the conventional norm at the time by becoming his second wife and continuing to work after having children.
In an effort to re-establish herself as a classical dancer (she is an expert Bharatnatyam dancer), she directed TV serials such as Noopur (1990) and "Women of India" in 1996.

Hema Malini was awarded the 'Padma Bhushan' in 1999 for her contribution to Indian Cinema.

Born in the village Ammankudi, located in the District of Trichy, Tamil Nadu, to V.S. Ramanujam Chakravarti and Jaya Chakravarti.

Set up a Natya Vihar Kalakendra, an institution dedicated to create, spread and present the age old Indian mythological themes from the epics like Ramayana, Mahabharata and other ancient scriptures through the medium of dance.

In 2003 was nominated to the Rajya Sabha (Parliament of India), serving on the Committee of External Affairs as an MP. In 2004, actress-turned-politician Hema formally joined the BJP (Bhartiya Janata Party).

Served as Chairperson of the National Film Development Corporation (NFDC) from 2000-2003.

Only for purposes of marriage, she converted to Islam, changed her name to Aisha Bi R. Chakravarty, and dharmendra converted his name into Dilawar Khan. They married on August 21, 1979.

Rajesh Khanna-Hema Malini pair had 2 hits in early 70's, but due to 3 failures in the 1975-1970 period, the producers were reluctant to cast them as a pair. After Hema got married, her only box office hits in the eighties were opposite Rajesh Khanna and Dharmendra only. Hema Malini had 8 blockbusters opposite Rajesh Khanna, after getting married in real life, as a pair from 1980-91 Bandish, Kudrat, Dard, Rajput, Hum Dono, Babu, Sitapur Ki Geeta and Durgaa where Khanna had special appearance.

CV Shridhar had rejected her for the Tamil film Venniradai(1965) in 1964 and her role went to actress Nirmala. Later Sridhar directed her in Gehri Chaal.

Aunt to Ramandep Arya and Randeep Arya. Actor Veerendra's children. Veerendra is the cousin of Dharmendta.