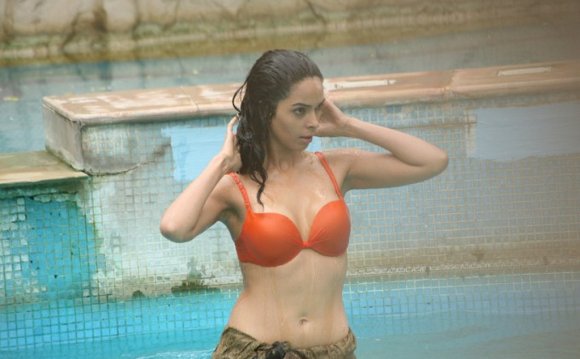 Glamour comes in all seasons and skin. And so summertime and swimsuits get along quite famously.

Fashion magazines acknowledge this connection with much pleasure. That explains most of the eye-popping, jaw-dropping sensuality you're about to witness in these pages.

Go on, treat yourself to smoking hot pix of Bollywood's bikini-clad cover girls.

Laying her vanilla image to rest, Dia Mirza comes of age, modeling a stylish Louis Vuitton two-piece to become one of Bazaar India's most memorable covers.

She may play second fiddle to Bollywood's top girls but the 29-year-old is the cynosure all eyes in this too-hot-to handle avatar.

No wonder they won't let her step out of the pool.

If it's Mallika, it's got to be scorching. Bollywood's favourite sex symbol lives it up in this playful, striped two-piece with a voluminous hairdo.

Hopefully, her upcoming Cannes appearance will be as saucy if not more.

Katrina may be in the news for demure sari-clad avatar in Raajneeti but her bold, blue bikini cover for Cosmopolitan is a wow-inducing reminder of her sexy past.

In all probability, you might not be able to recollect the last movie Ms Reddy starred in.

But there's no way you're going to forget her dreamy cover for Man's World.

At the moment though, she's too happy to retain her sexy status. Her shoot for Maxim in nothing more than gold swimwear is case in point.

In a bid to promote her beach goddess act in Dostana, Priyanka Chopra poses in the iconic silver bikini, flaunting those unbelievable curves to desired effect on Filmfare's glossy pages.

The Arora sisters turn on the heat like only they can.