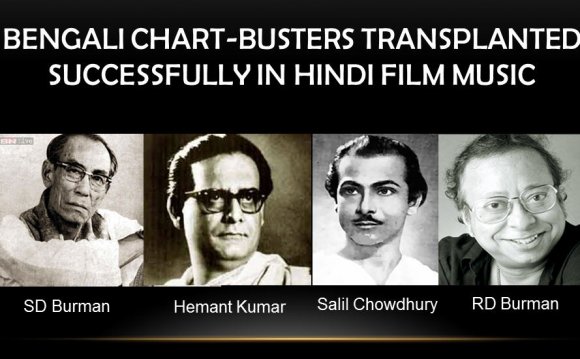 Everybody seems to be in love with Piku. The tale of an eccentric Bengali family has been applauded by critics and box-office alike. This blog is about the three Bengali songs in the movie which were intelligently used by director Shoojit Sircar.

I am not talking about the film’s Hindi songs composed by Anupam Roy. I am referring to the classics used in the film. At least two of them bring memories back.

1. The first song is Jeebone ki parbo na sung by Manna Dey from the 1969 film, Teen Bhubaner Pare, where an upper middle-class girl falls in love with a lower middle-class boy. In Piku, Big B dances briefly to the super dance track composed by Sudhin Dasgupta. The exertions cause him to fall ill the next day.

In Teen Bhubaner Pare, Soumitro Chatterjee does the dancing. He is cool with the twist though comedian Robi Ghosh – both were Satyajit Ray’s favourite – steals the show with his slo mo moves. You can also briefly see Tanuja, the film’s heroine.hope you don’t mind the poor visual quality.

2. The second song is, Aei poth jodi na shesh hoye, from the Uttam Kumar-Suchitra Sen black and white classic, Saptapadi (1961). This is, arguably, the most iconic duet in the history of Bengali cinema. The two idols driving through hinterland Bengal on a motorbike evoked a sense of romantic love that’s yet to be bettered in popular imagination.

The song, composed by Hemant Kumar, was later used in the Hindi film, Bin Badal Barsaat (1963) starring Biswajit and Asha Parekh. Ik bar zara phir keh do become a popular track but never received the same approval or rating as the Bengali version.

In Piku, director Sircar and writer Juhi Chaturvedi use the Saptapadi number to raise a few laughs. Remember Big B singing the song and explaining its meaning while they drive to Kolkata. Irrfan’s punchline brings the house down.

3. I had not heard the third Bengali song before. My colleague, Indranil Basu, enlightened me on the subject. He pointed out that Phagla khabi ki was taken from the film, Open Tee Bioscope (2015). In Piku, Big B’s brother dances to the number in their roomy Kolkata home. This track, a super combo of melody and rhythm, is written, sung and composed by Prasen. Open Tee Bioscope, incidentally, was produced by Sircar.

DISCLAIMER : Views expressed above are the author's own.

Avijit Ghosh is a senior editor at The Times of India, Delhi. Born in Agartala, he grew up in the small towns of Bihar and Jharkhand: Dumka, Giridih, Arrah and Ranchi. He is addicted to films, music, cricket and football and has written three books: a novel titled, Bandicoots in the Moonlight, and two works of non-fiction: the award-winning Cinema Bhojpuri, and, more recently, 40 Retakes: Bollywood classics you may have missed. He tweets irregularly from the handle @cinemawaleghosh

Avijit Ghosh is a senior editor at The Times of India, Delhi. Born in Agartala, he grew up in the small towns of Bihar and Jharkhand: Dumka, Giridih, Arrah . . .

10 Bengali Romantic Songs That Were Copied By Bollywood