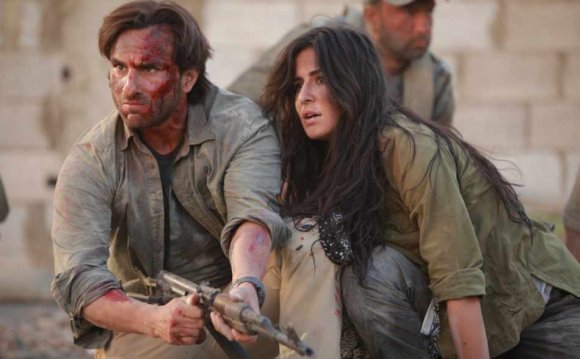 An experienced investigator confronts several conflicting theories about the perpetrators of a violent double homicide. (132 mins.)

“ 'Talwar' or Guilty (released in festivals under this name) is a gripping, infuriating, and at times a humorous film that reflects how politics, media and judiciary can change directions of the justice. It is a must watch movie, quite serious, intense and intriguing with no excessive and non-digestible masala or item numbers to please. ” - saadforever890

A man with a magnanimous spirit tries to take a young mute Pakistani girl back to her homeland to reunite her with her family. (163 mins.)

“ 'Bajrangi Bhaijaan' endorses the religion of Humanity, Love and Togetherness!!! It is an entertainer and inspires us to accept the diversity, culture and habits across the border and love them. Bajrangi Bhaijaan will definitely win your hearts. Must Watch! ” - saadforever890

An elite counter-intelligence unit learns of a plot, masterminded by a maniacal madman. With the clock ticking, it's up to them to track the terrorists' international tentacles and prevent them from striking at the heart of India. (159 mins.)

“ “Baby” is a fast-paced, smartly written and well-acted film that never wavers from its subject. Even if it doesn’t always keep you in suspense, it doesn’t let you wander too far. Pandey takes inspiration from Hollywood espionage films, but adapts the genre to the Indian context, adding the right touch of patriotism, secularism and family values to make it believable, but never overdoes it. his is one of those rare Bollywood movies that skips the melodrama, and for that alone, “Baby” deserves your time.This movie is a must watch! ” - saadforever890

Desperate measures are taken by a man who tries to save his family from the dark side of the law, after they commit an unexpected crime. (163 mins.)

“ ‘Drishyam’, is an edge-of-the-seat thriller, does not tell you how to act during time of brutal crimes, but it finely creates a story so charming that you will be left in with your pounding heart, and a smile on your face at the end of the film. A genre changing film. A must watch if you haven’t seen the original or any of the bilingual versions. ” - saadforever890

A historical account of the romance between the Maratha general, Baji Rao I and Mastani, a Muslim princess. (158 mins.)

“ 'Bajirao Mastani' is visual spectacle which should be lauded for surreal direction, exemplary CGI and commendable performances. ” - saadforever890

A quirky comedy about the relationship between an ageing father and his young daughter, living in a cosmopolitan city, dealing with each other's conflicting ideologies while being fully aware that they are each other's only emotional support. (123 mins.)

“ 'Piku' is a hugely entertaining, simple & sweet film, that also has some amazing performances working for it. Here's a film that has humor, emotions & the pace, one expected from it - a different tale, filled with relish able moments. Your age won't make a difference, since, the movie is for everyone. Go, experience something new. If you are looking to be a part of an endearing journey of a father and daughter, do watch this movie at the very earliest. If you are looking for make-up laden actors, designer costumes, over the top acting, actors bursting in a song & dance sequence at the drop of a hat, this movie is not for you. Otherwise must watch! ” - saadforever890

After his family is killed during a bank robbery, a man tries to avenge their death. (128 mins.)

“ 'Badlapur' is a a cinematic excellence filled violence and gore. A complete performance driven film. A film that deals with dark humor revenge. This is a film that will continue to live-on in the minds of cinema lovers for a long time to come. ” - saadforever890

A grief-stricken man takes the law into his own hands when he begins to kidnap and murder corrupt public servants. (128 mins.)

“ 'Gabbar is Back', is a full on masala entertainer, with enough entertainment moments & social messages to root for it. Even though it is not an amazing film, but an engaging watch, nonetheless. Here's a film that's sure to work big time with the masses! ” - saadforever890

In ancient India, an adventurous and daring man becomes involved in a decades old feud between two warring people. (159 mins.)

“ 'Baahubali: The Beginning', is a big, sweeping epic that runs for close to 2 hours and 40 minutes. Spanning generations, going back and forth between the present and the past, alternating between vastly contrasting landscapes, it's an ambitious work from a visionary filmmaker who skillfully blends a tale of old school palace politics with modern VFX to deliver a consistently watchable blockbuster. Just cant wait to watch the second installment 'Baahubali: The Conclusion'. ” - saadforever890

A slim uneducated guy is pressured into an arranged marriage with an over-weight college girl. The mismatched couple are challenged to compete in the annual wife-carrying race. (110 mins.)