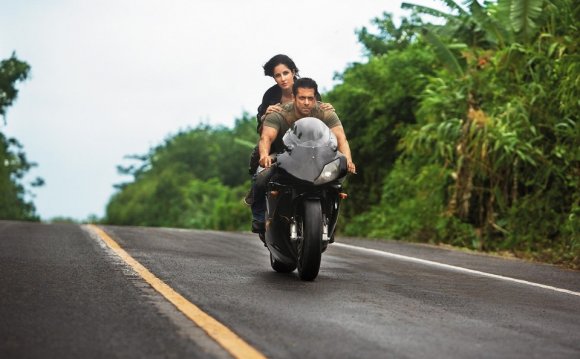 Every year, since 2009, Salman Khan releases a new movie on special occasion of Eid. But, the last year, on Eid 2013, there was no Salman’s film, his rival, Shahrukh Khan released Chennai Express on that occasion. This year, 2014, on Eid, after a gape of one year, Salman Khan is back with his new movie, Kick. The film is directed & produced by Sajid Nadiadwala and it features Salman Khan, Jacqueline Fernandez, Randeep Hooda and Nawazuddin Siddiqui in lead roles. If on this Eid Salman Khan will woo his fans with Kick, next year on the same occasion the superstar will treat his fans with Bajrangi Bhaijaan. However, there are some other stars as well who have released their movies on Eid. Here, we compiled a list of 10 hit Bollywood movies that released on Eid.

Another from Rani Mukerji, Dil Bole Hadippa! released on 18 September 2009 on Eid festival along Salman Khan’s wanted. The film stars Shahid Kapoor and Rani Mukerji in pivotal roles in the story about a young woman who pretends to be a man to join an all-male cricket team. Although it received negative reviews upon release, and was a box office disappointment, but Rani for her strong performance ‘Best Heroine’ V. Shantaram Awards and Best Actress (Critics’ Choice) award.

Waoo! Again this time, on Eid Salman gave another blockbuster hit, Dabangg. This action film, directed by Abhinav Kashyap and produced by Arbaaz Khanreleased on 10 September 2010. The film marks the debut of Sonakshi as an actress, Arbaaz as a producer and Kashyap as a director. Dabangg is the highest-grossing Bollywood film of 2010 and, as of 2012, the fourth highest–grossing Bollywood film of all time. It went on to win several awards, including the National Film Award for Best Popular Film Providing Wholesome Entertainment.

Now came a romance-action film of Salman, Bodyguard. Produced by Atul Agnihotri and featured Salman Khan and Kareena Kapoor in the lead roles, the film broke many records upon its release. On its opening, it went on to become the highest opening day grosser as well as the biggest grosser ever for a single day up until then. It is the highest grossing Bollywood film of 2011 and third highest–grossing Bollywood film as of 2012.

It was Salman’s arch rival King Khan‘s time to celebrate Eid with Chennai Express. The action comedy film directed by Rohit Shetty, features Shahrukh Khan and Deepika Padukone in lead roles, released on 8 August 2013 on Eid. Chennai Express became the highest grossing Bollywood film in India and around the world and won many awards.

This year, again Eid is booked for Salman Khan fans as the actor is turning devil in ‘Kick’. The film is directed & produced by Sajid Nadiadwala, and features Salman Khan, Jacqueline Fernandez, Randeep Hooda and Nawazuddin Siddiqui in lead roles. It is a remake of the Telugu film of the same name. The film is Scheduled for 25 July 2014, almost on Eid festival.

“Bajrangi Bhaijaan” co-starring Kareena Kapoor. Released on Eid 2015. This is another venture of Kabir Khan and Salman Khan who worked together in Ek Tha Tiger which too released on Eid 2012.