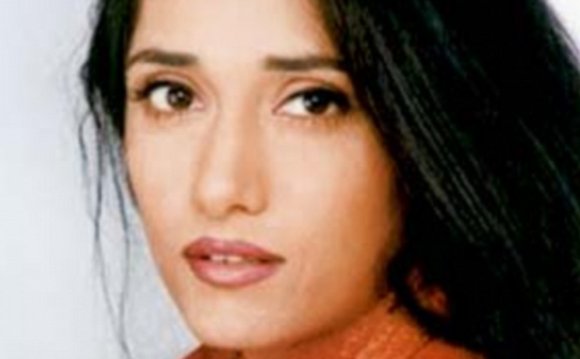 It turns out that she is a failed actress and has been struggling to get a foothold in the industry since 1996. The starlet is currently missing from her Versova house where she used to live with her brother, actor Puru Rajkumar, and mother Gayatri.

The police are reportedly looking for Vastavikta while her brother is tight-lipped about the stalking episode. Vastavikta's filmography is not a very glorious one and those who have worked with her recall her as an extremely quiet person given to erratic behaviour.

She was seen in a small role in a 1996 film Aisi Bhi Kya Jaldi Hai, directed by Sachin Pilgaonkar. Ten years later, she got her first break as a lead actress in Karan Razdan's supernatural dud, Eight: Shani.

Before this movie, however, Saajan director Lawrence D'Souza had in 2000 launched a film titled Dil Bhi Kya Cheez Hai with Vastavikta as the heroine opposite actor Arjan Bajwa, who was known as Deepak Bajwa those days.

D'Souza, however, replaced Vastavikta with Sanobar Kabir after shooting for a few days owing to her 'lack of acting ability'.

'I signed her for the film because she was Rajkumar's daughter. However, she failed to impress in front of the camera. I had to drop her after a few days of shooting, ' D'Souza said.

Bajwa, who had attended the launch of D'Souza's film along with Salma Agha, Milind Gunaji, Shama Sikandar and Yash Tonk, said: 'All I can recall about Vastavikta is that she was an extremely quiet person. I was a struggling newcomer those days and she was a star-daughter, and we hardly got a scope to break the ice, ' Bajwa said.

Many in the industry feel Vastavikta's withdrawn attitude bordering on psychotic spurts could be because of the over-protected childhood she has had. 'Rajkumar was very protective about his three children - Puru, Panini and Vastavikta.

'Leave alone exposing them to the film world, he wouldn't even let them venture out of home. As long as he was alive, he never allowed his daughter to consider the idea of working in films, ' an old time publicist said.

The first time the world got to see Vastavikta was at the launch of Puru's debut film, Bal Brahmachari, an industry insider said.