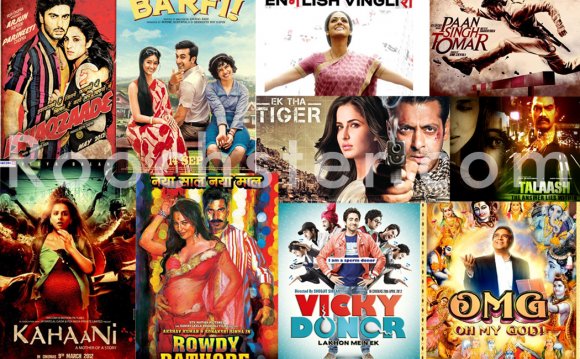 Every single year Bollywood serves a melange of exceptional and expendable cinema. It's only the ratio of one to another that differs from time to time.

As always some of the most hyped/anticipated films like Agent Vinod, Ishaqzaade, Heroine and Jab Tak Hai Jaan were let down by either flawed scripts, stereotype elements, a propensity for excesses, uninspired direction or that one-legged monster better known as 'second half.'

But I must add, I was rather thankful for that odd remake (Agneepath), which was respectful of its iconic source and evoked memories of a time when our revenge dramas were dominated by overpowering villains, an odd pair (Ek Main Aur Ekk Tu) who chose not to reveal the outcome of their relationship, yet another but significantly better retelling of a school teacher's contribution in the fight for freedom (Chittagong), a 40-something's romance against a quirky Parsi backdrop (Shirin Farhad Ki Toh Nikal Padi), the madcap Punjabi-themed banter of the Khurana family (Luv Shuv Tey Chicken Khurana), an extravagant teeny-bopper musical (Student of the Year) that lay no claim to depth and, finally, a Salman Khan starrer (Ek Tha Tiger) for not entirely assaulting my collective sense and sensibilities.

And with this we've now arrived at my favourite part of this year-end exercise, listing the year's 10 BEST Hindi Films. What I love about this selection is the diversity; they're all so different from each other in mood, treatment and ideology and yet achieving a common goal of entertainment with excellence. So without further ado, here's my compilation in no particular order.

In the best film of Sujoy Ghosh's career so far, a heavily pregnant Vidya Balan comes to Kolkata looking for her missing husband.

What appears to be an uncomplicated plot at first is aligned by fascinating characters that change properties around an intricate set-up of deep-rooted deception within an ambiance that celebrates its city's rich traditions, chaotic imagery and everyday temperament without dumbing down to cultural stereotypes.